What better way to celebrate the holidays than to go to a nice movie at a nice theater? How nice can that be?

Well, it was pretty sweet. I have good things to say about the picture that was released on Christmas Day.

If you haven’t seen “Into the Woods”, I will say this: it is either loved or hated. Mostly loved. I loved it, that’s for sure. But, I know people didn’t like it and I think it’s because the story is aimed to please a child’s mind.

Says a lot about me.

But, here’s the gist. You have your basic fairytales: Cinderella, Jack and the Beanstalk, Little Red Riding Hood, and Rapunzel. And, they’re all intertwined. Cinderella, Jack, the Baker, and his wife make four wishes: to go to the King’s festival, to be rich, and to have a child. The witch (Meryl Streep) confronts the Baker and his wife, telling them that they have to fetch four ingredients to reverse a curse so they can have their baby: a cow as white as milk, a cape as red as blood, the hair as yellow as corn, and the slipper as pure as gold. The Baker and his wife go into the woods to find these ingredients, while, simultaneously, all the other characters are doing the same.

Like every fairytale, they all get their wishes. Cinderella (Anna Kendrick) marries the Prince (Chris Pine), Jack steals riches from the giant and becomes wealthy, Red Riding Hood makes it to Grandmother’s house, and the Baker and his wife have a child.

This is what made the movie so beautiful. The adaptation from the 1987 original Broadway musical has come to life on screen and, damn, has made an everlasting impact on not only a child’s mind but everyone else’s as well.

You see, it teaches you a lot of things. And that’s really what a story is about. Into the Woods brings the characters their happily ever after, but there’s always an “after” after the happily ever after. Sometimes, not everything works out the way we want it to. We’re always going to want more, and sometimes we have to find something in between.

“Be careful what you wish for” – This was specifically written out in the trailer and is probably the biggest theme out of all of them. You get your wish, but then you have to suffer the consequences. And you have to accept that. You also have to understand that

you can’t get everything you want with no after-effect…that’s not life. That’s a fairytale. And, that’s what Into the Woods tries to tell you.

“No one is alone” – I put that song featured from the movie at the beginning because I think this may be one of the deepest songs in the entire musical. But so simple. You may be suffering through whatever it is: loss, hardship, disappointment. However, you’re not the only one who is and you should remember that. We need to all remember that there is someone else out there who cares and who understands you, even if they’re not with you at that very moment. We also need to remember that even if someone doesn’t understand, they may still be trying to help and we should open those doors for them. Let them in. Even if they don’t help, maybe they’re trying to, at least.

“Take responsibility for your own actions” – This was a huge theme, and I think is mainly aimed at the children in the audience. It’s a lesson that we have to learn when we grow up. In the middle of the story, Cinderella, the Baker, Jack, the Witch, and Red Riding Hood all blame each other for the giantess in the woods who is killing everyone. The Witch, the one who is always “right”, tells them all to stop blaming each other and to find a solution, by feeding Jack to the giantess, but nobody listens. They all think they get their justice by blaming each other, when that won’t get you anywhere. The only 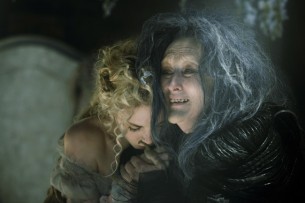 But they will, eventually. They will listen.

Sorry I didn’t go too much into tech details, everyone! I think, especially when it comes down to fairytales and childhood stories, it comes down to the themes. The stories we tell each other. The strengths and weaknesses. The things we learn.