New on Netflix. But well-known already.

Two words: Tina Fey. Both a genius and extremely hilarious. She’s my alter-ego. Just kidding. She’s the alter-ego I wish I was.

When I saw the first episode, I was a little appalled because it looked ridiculous and dumb. The story revolves around a girl, named Kimmy, who comes out of an underground cult for the first time in 15 years. She was kept captive along with three other women by an insane priest who convinced them that they were the only dumb minds alive who survived the apocalypse. Except there was no apocalypse.

And it was all a lie.

So Kimmy decides to not go back to Indiana where she was kept underground and, instead, stays in New York City with a gay roommate (Titus – my favorite) and works for an errant, newly-rich woman, Jacqueline (Jena from 30 Rock!). The personality types are way off key, but they’ve all got one problem that they’re trying to overcome: they’re doing their best to fit in at New York.

Except Kimmy’s situation is hilariously different. Since she’s been underground for 15 years, she still acts like she’s a middle school kid. So she wears extremely bright colors and is optimistic about everything in life. She plays on the playground and pretends she’s in fairytales and eats candy all the time. I think this is what weirded me out at first.

You see, I was expecting this show to be a lot like 30 Rock, because that show was one of my favorites while it was running. Except it’s nothing like 30 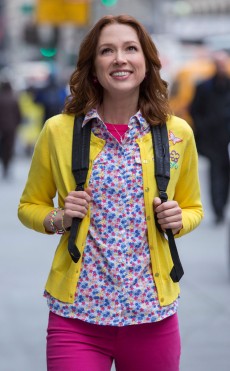 Rock and only one of the actors from that series is in here (Jena). Tina Fey writes and produces this new series and premiers as different characters throughout, which makes it funny. It took me a while to like this show and once I did, I couldn’t stop watching.

So I ended up finishing the season in 2 days.

Advice #1 for whenever you’re watching ANYTHING: don’t ever watch it with somebody who laughs at random parts, in which you don’t think it’s funny, and don’t watch it with people who explain to you why it’s funny. That might be why I didn’t like it at first (no offense). Learn from your mistakes, my friends.

But that also may go for me and movies in general. I used to go to the movies alone sometimes because 1) dates are the awkward parts that I’ll do anything to avoid and 2) I hate it when people talk during shows and movies. It forces me to look at the bad stuff of the movie instead of enjoying it. Sorry, bud.

Anyway, so this series is ridiculously hilarious. A little weird and cheesy at first, but you can see why it’s amazing once you watch a couple episodes. Don’t watch it with other people unless they understand you: this is sort of like my guilty pleasure. I want more episodes and more seasons!