You are now a new person. Now, featuring my favorite song that I discovered in the past couple weeks along with my boring final exams. Why can’t my life be like this? Or maybe it has. Because I’ve had the time of my life, freshman year. So, bye!

1. This is your chance to re-invent yourself. So when you show up to your first class, this is your one chance to give yourself a new name. A nickname. Something you’ve always wanted to be called. And with that new name, you can change yourself. Here, at a big campus, there may be a few people from high school you knew, but nobody who is going to spread all over the school that you lied about who you are. For the most part, you know NOBODY here. If you were shy, you’re not anymore. If you were annoying, you’re not anymore. If you want to be someone you were too scared to be in high school, go change that, now. You can now truly express who you are without feeling ashamed or feel as if somebody is looking at you strange. Put all those bad grades and bad scores behind you because nobody cares about them anymore. Throw that shitty reputation away, too, because nobody knows anything about you. It’s like you’re being reborn. And you’re experiencing something new as a blank slate. That’s you and everyone else on this campus. So make the most of it.

2. Do NOT date anyone the first semester of college. There is NO time-hole that says “Boyfriend” or “Girlfriend”. Or “Cuddling” or “Sex”. You don’t write that in your planner. Along with the idea of “re-inventing” ourselves comes the idea that we can get a new boyfriend or girlfriend because we probably never had one in high school. Do not focus on this, please. It might be fun for you to get around, knock some hook-ups off your bucket list, and have fun (if you do this, please stay safe). But

don’t tie yourself down. I actually am going to discourage tying yourself down more than I do about casually hanging out and hooking up. Let me just tell you this: all the relationships that I know of that started first semester immediately ended in the beginning of second semester. And it was usually because one of the people in the relationship thought that the relationship was taking up way too much time and he or she actually just didn’t like the other person as much as they thought they did. When you start questioning whether you’re going to marry that guy you met in the first week of school, I plead you to STOP questioning yourself. You’re barely even learning how to live with another person.

Plus, there’s just virtually no time.

3. Procrastination doesn’t work anymore. Oh boy, trust me. College is easier than high school when you do things ahead of time. You won’t be as stressed and you won’t feel like you want to break down and cry, which is harder to do when you’re parents aren’t around. Plus, it’s a little pathetic. When you procrastinate, you’re going to be stress-eating (hello, freshman fifteen) and your brains will want to explode. All your friends will be going out as you sit around and try to cram 200 pages worth of material in your head, sometimes more. Finals are already hard enough as they are, without the procrastination, and you want to diminish the amount of difficulty to do things by the end of the year. This may sound crazy, but PLAN AHEAD. There’s no use in sleeping in every morning and skipping classes. My cousin did that for two years and he now lives in his mother’s basement. Who wants to date a guy who still lives with his mom?

This isn’t high school anymore, dudes. College is pretty easy to get into, if you think about it, because there is likely still to be school after undergrad. So, we can fuck around as much in high school as we want and still get into state schools. But if you keep up the same attitude in college, you’re dead meat in the real world because 1) you won’t be able to get into grad school, because it’s A LOT harder and 2) your mom may not be nice enough like my aunt to take you back into her house.

4. Drink healthy…not for dealing with stress. This is what I loved about my school. I 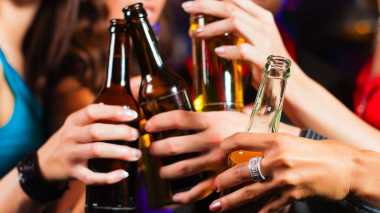 attend a state school, so a lot of people from high school thought of it as a “party school.” Heck, I even thought of it as the party school when I applied, and I was less than ecstatic to even attend this school because I hated people who partied all the time. However, the material we learn is not easy to absorb and it’s not fun to sit in your dorm room on a Friday and Saturday night just to read a textbook (I did it anyway). So, yes, a lot of people go out to drink and party. As a matter of fact, I’d be willing to bet that about 75% of the school did this. And it’s not just at the state schools, but also at your big ivy leagues and preppy private schools. Yeah, don’t classify and stereotype us, because if anything, we’re doing it for fun. That’s how you’re supposed to party. Sitting alone in your room and stress drinking is the worst idea, because it promotes depression and alcoholism, which is what is happening at these big schools. And I truly feel bad for these people, knowing that if I were in that situation, I’d be dead when I went out into the real world. If not, extremely depressed.

6. Rush for farts and giggles. This came along with my party school stereotype: sorority girls party a lot, which is distracting and will pull down your GPA. NOT TRUE. Each sorority 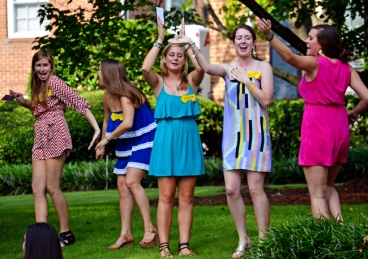 and fraternity is different, and each has different reputations. I have a lot of friends who are in the honors program and still maintain status in a high-tiered sorority. The only things I hate about sororities is that 1) you have to pay for your friends and 2) the system is literally a mimicry of high school. You have your upper-tiered, middle-tiered, and lower-tiered sororities where you basically have your popular crowd of identical thin blonde girls while the lower-tiered are the most diverse in culture. This may be a purely southern thing, but I’m definitely against it. However, I think it’s sad that you have to pay for your friends, but I don’t want to criticize this and become a hypocrite because I’m thinking about rushing myself. During rush, you meet a LOT of new girls and friends, which is really key to having a social life at any college (not the rushing part, the friends part). I hate to conform to the system, but when all my friends are going out on a Saturday because they have a date night that I can’t go to, it’s sort of sad to be sitting in my room alone and waiting for them to come back from their “night of fun.”

7. Find your passion, not your parents’. A lot of people think they know their passions because they grew up thinking, “I want to be a doctor,” since that’s what they’re parents told them. But are you actually good at chemistry or biology? And most importantly, do you like what you’re studying? Follow your heart. I know this is hard, because you kind of just want to be like, “Heart, speak to me and tell me what I want.” It’s not clear cut or black and white. You won’t be able to immediately find it. They’re all lying. Sitting in an intro to psychology class that you like does not mean that you should become a psychology major. Sparking interest may also not determine how well you’re going to succeed or even how practical that major is for you. This is my problem when I have to apply to the business and law schools because I have NO idea

what I’m doing. A lot of the nitty gritty work is in the upper level courses that you HAVEN’T taken yet, which makes me wonder why you can’t just determine your major once you graduate. I love every subject, but which one do I love the most? That’s difficult to tell on your own, so we turn to our parents to tell us. But, as much as we love our parents, they’re not us and they can’t tell us what to do past a certain point. This is the point. You need to make your own decisions. So a good way to figure out what path you want to follow is to join some clubs (take some time away from partying, my friend). It’s so worth it and it’s DEFINITELY not a waste of your time.

8. You have to ask questions if you want to stay competitive. I feel like this was more of an option in high school than it was an obligation. It’s still this way in college, but you should honestly ask questions as if you were obligated to since you (or your parents) are paying for you to be at a school and everyone expects you to get some type of return on this investment. Make the most use out of your money and time. This is the “best four years of your life.” So make it count. Have fun, but don’t lose sight of the target. Because you’ve got this in the bag. 2 or 3 C’s may not hurt, but do NOT get discouraged. There’s always a chance to redeem yourself. Not to erase your mistakes, but to move forward.

5 thoughts on “What College Taught Me”