It’s hard to say that life is easy here in (what might as well be) the new world. But it’s getting easier. Even though it’s been almost four weeks, who cares anymore? I’m slow, they’re going to have to get used to it, because I’m not pressuring myself to be a fluent person anymore. You know why? Because I’m tired. And there are days where I want to fall on the ground from just doing homework.

I really want to talk about what life is like through the perspective of the everyday person walking in the South of France. The city is laid out like a huge circle, with downtown being in the middle. Trams and buses run in every direction, but it’s essential to know which line to take because you’re fucking screwed if you don’t pay attention.

For me, I take the tram pass one town and get off at an early stop so I can walk the way to class. There are several people who will take the tram directly to their destination, because there are so many stops, but it’s not weird to them that I like to walk more. At home, people thought I was a freaking health addict. Here, they still think the same thing, but at least they understand. I want to be healthy, and so does everyone else here. Except they smoke cigarettes like they couldn’t live without them, which is a stereotype that is most definitely true. When I pass by some of these people, I can sometimes see the bones popping out of their skin, which is scary as shit.

French people don’t really wear berets (sorry, dudes), but we sort of all really knew that was a stereotype. Yet, they DO eat baguettes way too often. Baguettes here are like a euro, so they’ll just be walking and munching on a whole baguette in the street, which is really funny.

People here also don’t really walk with a sense of purpose. They’re very prideful in their culture and content with the way they live, so there’s really no need to go too fast. Yes, everyone here moves rather fast, but nobody’s going in one direction. People here just mosey around and if they’re heading directly towards you, you better get out of their way because they’re not going to move for you. 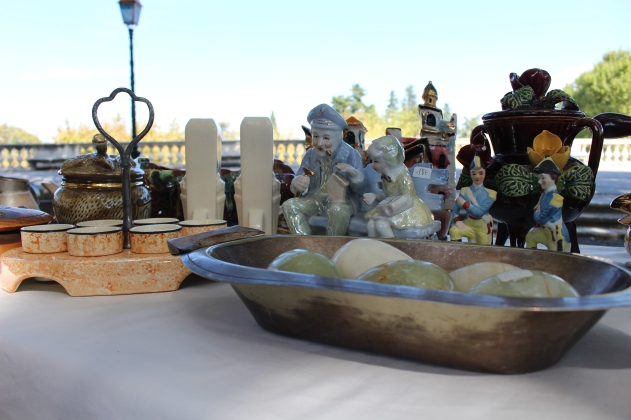 Another huge cultural fact about France is that open markets are incredibly popular. I got lucky enough to “mosey” around town myself on Sunday and near us, there’s this huge monument that mimics the Arc de Triomphe in Paris (it’s called the Arc de Triomphe in Montpellier lol). This is where I ate the fabulous paella for my first time and really got a glimpse of what good seafood actually is.

Here, there was also something called a marche aux pucés. At first, I thought this just meant open market because that’s what all my French textbooks said. But then, when I said that at dinner last night and asked if there was good fruit at the market, they looked at me as if I was crazy. Marche aux pucés is actually just an open market for antiques, and at the Peyrou, this is what I found! Old antiques, old vinyls, old books. It was rad because you don’t discover things like that everyday, and it really was a change of pace for me. These things cluttered up in antique stores in the states, but we never went in because my mom always called it the junk store.

It’s not a junk store, though. I love seeing the history behind everything, even though I may not buy it. It’s gorgeous and it’s so cool to learn about how life was before you were born. And to discover new things. Plus you feel really French when you’re just moseying around near a fake Arc de Triomphe and listening to people bargain in French.