It’s a break up song. Of course – it’s Taylor Swift. But, FINALLY, she’s figured out what it means to get over it (or at least made us think she believes). Watch the whole thing.

Not a GREAT video, but also not a terrible one, either. As a movie-addict, I have pretty high standards for what is good and what is bad. But I have to admit that Taylor Swift has impressed me for once in my life. Why do you hate Taylor Swift? Well, I don’t hate her, per se. But I wouldn’t say that I’m obsessed with her music. Why? Because it’s somewhat unoriginal and extremely basic. Half the things she expresses through music have been better expressed through better artists in much more creative ways.

Nevertheless, I’m impressed with “Out of the Woods.” Even though it’s not great, it gives a message that we should all take with a grain of salt, no matter what journey we’re on. Is this an evaluation of Swift’s new video? Partially, but I’m hoping that the lessons I’ve pulled out of it may help you, as well.

Swift makes it simple by avoiding all the costume changes in booty shaking that hovered over “Shake it Off.” She also avoids the straight-up, basic story-telling that she’s done in almost all her videos, like “Wildest Dreams,” “Love Story,” or “You Belong with Me.” If you notice in almost all those videos, there’s a boy, there’s a girl, and they fall in
love/break up. The end. Sometimes, I wonder how she gets so many awards…but then I think how main-stream everything is.

But she’s finally become an artist. I italicize that and people laugh at my exaggerations, but it’s true. Stop following the same storyline over and over again – we get it. It’s a trend. I don’t know why people are obsessed with it. Plus all her songs are about past boyfriends, which is something I’m not too comfortable with. Yes, reflecting on past relationships is good, but sing about more. Honestly, I would be pretty pissed off if I was her ex-boyfriend and had a song that was #1 on Billboards that trashed everything that I keep private in a relationship.

“Out of the Woods” branches out a little more by, firstly, not having anybody but her in it. It focuses on her own journey instead of blaming someone else for her pain. Swift keeps it simple with the same blue dress. By keeping these variable simple, it allows us to analyze the situation at more of an emotional level as we watch the scenes and the dress change simultaneously. As always, she still tries to look perfect and exotic, but I guess that’s what a lot of artists do. It’s not natural, but it’s also Hollywood so I can’t really dispute it.

2. Some Pain is Self-Created.

She doesn’t blame anyone for this pain, thank goodness and finally! If this song is about a 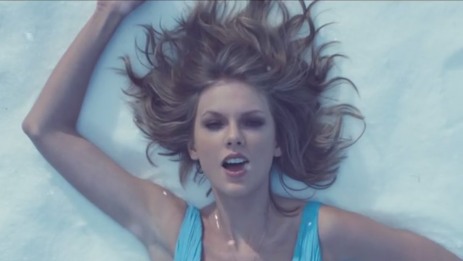 breakup or a past relationship, it’s definitely not painted in a terrible light. Notice that these “woods” and trees only start growing in the beginning, and then turn into this estranged forest that she gets lost in. There’s a lot of switching in and out of the woods between different types of scenes where you see a similarity: suffer.

These are catastrophic scenes: snowstorms, drowning, forest fires, rainstorms, etc. The greatest part is that all these scenes, at least in my interpretation, are worse than being lost in a quiet forest and are only a part of her imagination. In this sense, the pain that she’s experiencing through these scenes are created so that pain itself is created as well. The woods are part of her problem as being the setting of where she suffers and feels lost and confused, which only started when the stems began growing while she’s standing on the beach (or in the clear)

It’s possible to make a good music video that fully embodies the lyrics without telling a straight-up story that’s basic and boring. But it’s incredibly difficult, and Swift did it. I’m sure most of you can pull out that the woods symbolizes her pain and her confusion, so, obviously, she wants to get “out of the woods.” Then, you have that really strange beach she’s standing on (where I would like to go if nobody’s there *cough cough green screened) that resembles “the clear.”

The great part is that it’s cyclical – she begins and ends in the clear. Perhaps she was in the clear the whole time and even the woods weren’t real. She imagined her own pain. Yes, she “lost him” or you lose whoever or whatever you had. Even though that pain is unnecessary, we create it anyway because it is part of suffering – there’s nothing wrong with that. Sometimes, and usually, this pain is unavoidable, depending on how much we care about what we lost. But we’re always in “the clear” and the woods may just be that ugly confusion stuffed into the back of our brains

4. Rebound on yourself, not someone else.

The cyclical nature of this video truly helps. Her biggest challenge and her strongest antagonist is herself, and 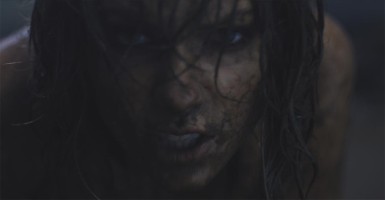 you don’t physically see that until the end. After walking through blizzards and storms and all this crap nonsense that nobody wants to walk through, it’s as if she goes back in time (or not even in time) and confronts herself to stop and reflect on the suffering she was/is about to go through. It was a sign that she needs to reflect on herself in order to move past whatever suffering she was going through.

Or perhaps she was tapping her own shoulder at the end to remind herself of who she was before she “lost him.” So many different interpretations can be pulled from this and that’s what’s so great about it. Stop blaming someone else for your problems. Stop blaming something else for your problems. You’re strong and you have the capability to move past whatever you’re going through. Because after all, it’s your life and nobody can make you suffer unless you let them.