After watching this movie a few times, I felt the need to read through it more critically, but ended up finding myself praising the story more than I expected. I do have some thoughts that are critical, but I honestly think this is one of the rawest, most courageous stories I have ever seen.

Now, in true Hollywood fashion, every true story is stretched and twisted a little bit more than it should be. The

story is about a boy named Michael Oher, who lived in the slums as an abandoned child, and ends up in a rich, private school with his caretaker’s son. The only reason he got into the school, however, is because of his large build and good self-defense skills that could come in handy during sports. Finding himself walking alone in the middle of the night and scavenging for food like a homeless man, Leigh Anne Tuohy and her family takes Michael into her home and helps him progress through the middle class as a “normal kid”. You may think that no white woman would ever take a big, scary black boy into her house just because he’s big and black, but this story is as true as I have seen. I’m not being racist here, please understand that, and the differentiation between race and class has been well defined and outlined throughout the movie. 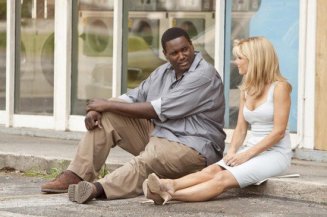 “I look and I see white everywhere.  White walls, white floors and a lot of white people. The teachers do not know, I have no idea of anything they are talking about. I do not want to listen to anyone especially the teachers. They are giving homeworks and expecting me to do the problems on my own. I have never done homework in my life. I go to the bathroom and look in the mirror and say “This is not Micheal Oher.”

Sometimes, I wish that everyone in the world was blind. Losing your ability to see would probably be for the better. Would pretty people date ugly people? Would  black people drink coffee at Starbucks with white people? Would poor people live with rich people?

“The Blind Side” looks like it is about football, but it’s about so much more than that, which I believe its message was well told. You all say you’re not racist, but you will always judge somebody by their looks and immediately come up with some sort of assumption about them: the girl with the bony face is probably really mean or the black guy is probably the leader of a gang. And, through this movie, we watch Michael Oher struggle with his blind side, trying to get himself to see past who he is on the outside. A black man doesn’t have to be scary. He can be as scary as a white man or an Asian man or a Hispanic man. White and black, it doesn’t matter. It really shouldn’t matter, and in the sense of racism and the attempt to blend in, “The Blind Side” truly tests the audience’s sense of humanity.

Like I said, I do not pull in spoiler alerts, but the simplest acts are the truest acts. We judge people based on how 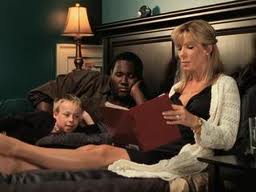 they look before they have even spoken, and these people haven’t done anything. Silence, in this case, will speak loud to those who don’t want to listen: judgement should never be taken lightly. This is partially why when somebody asks me if I hate someone (I have no idea why they would ask me this anyway), I would say, “I rarely hate anyone.” Or if they asked me my opinion on someone, I would give them an honest answer, based on my experiences with them.

And that leads to my explanation that simple acts do speak the loudest. People who try to hard to impress others are the easiest to see through, paper-thin. You can literally see the little wheels turning in their heads as they constantly try to project this self-image who isn’t really them. Michael Oher never tried to project any image, at all; instead, he just did what he thought was “right”, the simplest acts, whatever that may be. Instinct. And instinct proved him to be someone who was neither white nor black.

So self explanatory. So true. I have mad, mad respect for Mrs. Touhy, because I don’t know anyone who would have the guts to allow a complete stranger not only enter their home, but raise him. This has nothing to do with
him being black, like Mrs. Touhy said. Throughout the movie, you will watch Mrs. Touhy continuously test her own humanity, trying to figure out why did she let this complete stranger into her home? Why did she not even hesitate to offer him a high-class education and free food on the table?

Not only did Mrs. Touhy express the courage to take Michael in, but also her entire family. SJ, her son, was about ten years younger than Michael and ten times smaller than him, but he wasn’t scared to be the first one to shake his hand. Collins, her daughter, was constantly mocked for having a “big black boy” living under the same roof as 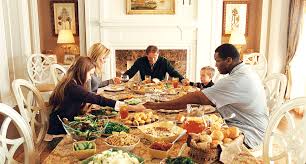 her, but she chose to b
e with him in public whenever he was alone. Mr. Touhy, as well, showed concern and interest into taking care of Michael’s life and helping him strive for his interests, along with his wife.

And as Mrs. Touhy and her family tested their own humanity, I found myself doing the same. I know this movie is from 2010 (oh no! it’s old), I still await the film that could match its straight-up integrity.